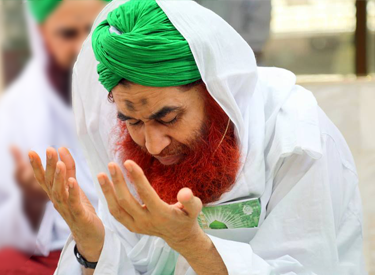 In every era, Allah عزوجل sent such holy personalities to the Ummah of His beloved and blessed Prophet (May Peace and blessing of Allah be upon him) who excellently fulfilled the responsibility of calling people towards righteousness and preventing them from misdeeds. These righteous saints inculcated in other Muslims the mindset that: I must strive to reform myself and the people of the entire world. One of such great personalities is Shaykh-e-Tariqat Amir-e-Ahl-e-Sunnat ‘Allamah Maulana Abu Bilal Muhammad Ilyas Attar Qadiri Razavi Ziyaee who launched the Madani campaign of Dawat-e-Islami, a global & non-political movement for the preaching of Quran and Sunnah, with the help of some of his companions in Karachi, Pakistan in Zul-Qa’da-tul-Haram 1401 A.H. (September, 1981). He is a symbol of past saints in attributes, like fear of Allah, deep devotion to the beloved Prophet, zeal and determination for following Quran & Sunnah, for reviving Sunnah, piety, forgiveness, perseverance, patience, thankfulness, humility, simplicity, sincerity, asceticism, good manners, absolute disinterest in the world, concern about the protection of faith, ambition to spread religious knowledge and reforming the Muslims.

Through the platform of Dawat-e-Islami, he has brought a Madani revolution in the lives of millions of Muslims, especially the young Islamic brothers and sisters. Many sinful youths repented of their sins, adopting a pious way of life. Those previously not offering Salah not only started offering Salah, but also many progressed even further becoming the Imams of Masajid; disobedient and rude children began to respect and obey their parents; those wandering in the dark valley of Kufr (non-belief) were blessed with the light of Islam; those fond of reading romantic and useless novels got attracted to reading the books and booklets of the scholars of Ahl-e-Sunnat those fond of excursions started travelling with Madani Qafilahs in the path of Allah; those whose aim was just to accumulate the wealth of the world adopted the Madani aim that, ‘I must strive to reform myself and the people of the entire world.’

By the grace of Allah عزوجلby the benevolence of His Prophet (May Peace and blessing of Allah be upon him), by the blessings of Prophet’s companions and by the spiritual link with saints, by the support of ‘Ulama and Mashaikh and by virtue of Amir-e-Ahl-e-Sunnat’s untiring efforts, not only has the Madani message of Dawat-e-Islami, founded in Karachi, reached throughout Pakistan, but also (by the time of the writing of this account) nearly 195 countries of the world including India, Bangladesh, Arab Emirates, Sri Lanka, USA, England, Australia, Korea and South Africa. Efforts for further progress are underway. Presently (i.e. in 1435 A.H.), Dawat-e-Islami is serving in more than 92 disciplines. Weekly Sunnah-Inspiring Ijtima’at are being held throughout the world at thousands of locations. Innumerable Mubalighins (preachers) with the overwhelming spirit of reforming the Ummah are travelling with Sunnah-Inspiring Madani Qafilahs advancing towards the Madani mission that: I must strive to reform myself and the people of the entire world.

May Allah bless Dawat-e-Islami with such a grace

That it becomes glorious at each and every place!